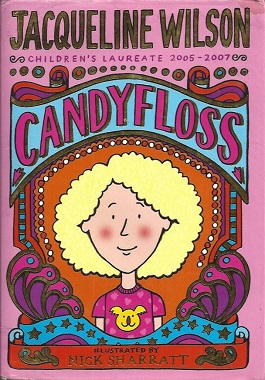 Candyfloss is a novel by Jacqueline Wilson, first published in 2006 by Doubleday.

Flora "Floss" Barnes's mother Sally and father Charlie split up when she was little and she wishes they'd get back together because she doesn't like her stepfather, Steve, and her little half-brother Tiger. The book opens on Floss's birthday when Sally and Steve take her to TGI Friday's, and tell her that they are going to Australia for six months because of Steve's job. Floss wants to go with them, but she doesn't want to leave Charlie who's a cheerful and fun dad, who runs his own café (named Charlie's but the c came off so it shows Harlie's) which is quickly going out of business.

Floss convinces Sally that she can live with Charlie, while they are in Australia. Floss has a tough time getting used to life without her mother since her father is not used to taking care of Floss seven days a week and she is not used to his home seven days a week, either. Floss's school uniforms get dirtier and disarrayed as Charlie is not used to washing and ironing them, but her teacher, Mrs. Horsefield, helps her out, as Floss is one of her personal favorite students The father and daughter learn to cope and meet Rose, a very caring woman who works at a fair. After Rose leaves (traveling with the fair), they keep an eye out for her fair. Meanwhile, a regular customer at the café Billy the Chip puts money on a horse that Floss selects, and he wins money on the horse.

Floss also has a best friend, Rhiannon, who isn't much of a friend – making fun of her and her father and starting cruel rumours about Floss's mother walking out on Floss. Rhiannon's posh and snobby mother assumes that Charlie is an unfit father and repeatedly tries to lecture him and pamper Floss believing she is living in an unclean dump. Floss ends her friendship with Rhiannon and finds a new friend, Susan, who is interested in all her favorite things. This causes Rhiannon to turn on her and continually torment Floss calling her "Smelly Chip".

After losing the café and the flat, Billy the Chip mentions he is going to Australia to visit his son for one month and needs Floss and Charlie to live in his house while Charlie works in Billy's chip van. However, one day, a group of "yobbos" (as Charlie calls them) fight Rose's son Saul and when he attempts to stop the fistfight, the van catches on fire with Floss trapped inside. Charlie fights his way through the fire and rescues her, while in the process burning his hands. When the fair comes back in town, Rose and Charlie consider dating, and Floss finds out both are interested in each other and get along well, while Rose lets Floss help her in the candyfloss stall. Later, Susan, along with her parents, goes to stay in her holiday home in France and says farewell to Floss at the beginning of summer. The book closes with Floss thinking about dying her hair pink (like candy floss).

A generally happy and bubbly girl who sometimes struggles to stand up for herself. She makes the life changing choice to remain with her father Charlie when her mother Sally, stepfather Steve, and half-brother Tiger (Tim) go to Australia. She falls out with her best friend Rhiannon but later becomes friends with Susan. She is small with masses of blonde curly hair which she dyes pink.

Sally's ex-husband and Floss's father. He runs a little local café but is massively in debt and loses it midway through the book. He ends up running a chip van until it gets burnt down. He is plump with dark hair. Despite being a little absent minded sometimes, he cares deeply for Floss and only wants what's best for her. He saves her life when the chip van gets burnt down. He ends up starting a romantic relationship with Rose from the funfair.

Charlie's ex-wife, Steve's wife and Floss and Tiger's mother. She is a pretty woman who after divorcing Charlie, got remarried to Steve and had a son with him named Tim (who is known as Tiger). She tries to act posh. She still gets on with Charlie though she is always mocking his way of being. She announces to Floss on her birthday that the whole family is moving to Australia for Steve's new job and is heartbroken when Floss remains with Charlie. Floss gets defensive when anyone says Sally walked out on her. Although Floss stays with her father, she misses her mother terribly.

The new girl in Floss's class who is extremely clever. She was nicknamed 'Swotty Potty' by Judy and Margot. She wants to be Floss's friend but is scared of Rhiannon. Once Floss breaks friends with Rhiannon though, Susan and Floss become best friends. They both enjoy art, books and being creative. Susan has short brown hair, glasses and a massive obsession with numbers.

Floss's former best friend. She is very pretty with straight black hair and a slim figure. She is also rich and enjoys flaunting her wealth. She can be very rude along with Margot and Judy who bully Susan and Floss after the two fall out. She lies to people that Floss's mother has walked out on her when she hasn't.

Margrot is Rhiannon's best friend in pretty much all of the book. Along with Judy and Rhiannon she bullies Floss and calls her smelly chip. Margot is described by having "such a flat tummy" according to Rhiannon and she likes to speak in a fake American accent.

Judy is Margot's best friend at the start of the book before she becomes best friends with Rhiannon. Not much is said about Judy. She has black hair in pigtails. Judy also bullies Floss with Margot and Rhiannon. They eventually leave Judy out and Judy just trails along

She runs the candyfloss stall at the funfair that Floss and Charlie go to at the start. She is very compassionate and helps Floss and Charlie when they get in a fight. At the end of the book she returns to thank Charlie for saving her son Saul during the fight and fire at the chip van. She develops romantic feelings for Charlie as well at the end and is in favour of Charlie and Floss joining up with the fair in the summer. She is pretty with blonde hair and wears much red and pink clothing. She says she is much older than Charlie.

Mrs. Van Dyke is the Deputy Head, the scariest strictest teacher in the whole school.

All content from Kiddle encyclopedia articles (including the article images and facts) can be freely used under Attribution-ShareAlike license, unless stated otherwise. Cite this article:
Candyfloss (novel) Facts for Kids. Kiddle Encyclopedia.