The Canterbury-St Martin's hoard is a coin-hoard found in the 19th century at Canterbury, Kent dating from the 6th century. The group in the World Museum, Liverpool consists of eight items, including three gold coins mounted with suspension loops for use as pendants. One of these is the Liudhard medalet, the earliest surviving Anglo-Saxon coin. Another coin is in the Bibliotheque Nationale.

The hoard was found some time before 25 April 1844, when some of the items from the find were first discussed at a meeting of the Royal Numismatic Society by Charles Roach Smith. All that Smith knew of the date when they were found was that it was "a few years since", as he wrote in 1844. The location of the hoard is usually given as the churchyard of St Martin's Church in Canterbury. However, the first publication about the find, by Smith, states that the find was on the "grounds of the monastery of St Augustine". The objects were acquired by W. H. Rolfe, a resident of Sandwich, Kent in two stages, a first acquisition of three items acquired before April 1844, and five more items procured soon after September 1844.

The first three items were first published in 1844 in Collectanea Antiqua, and when the five further items were obtained, that publication was amended to reflect the new items. Smith then published the entire contents of the hoard in the Numismatic Chronicle in 1845.

The items in the hoard have been examined by x-ray and fluorescent. The author of this study, S. C. Hawkes, argues that the eight items in the hoard were found in different graves. However, the historian Philip Grierson felt that the possibility of two graves from different time periods both containing coins of the same period was so small as to make the likelihood of the hoard coming from two graves slim.

The hoard is the only late-6th- or early-7th-century find of gold jewellery in a grave in a churchyard. All of the coins in the hoard were probably part of a necklace that was buried in a woman's grave. One of the items in the hoard, the Liudhard medalet, is the earliest surviving Anglo-Saxon coin. 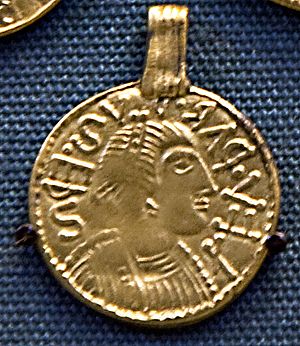 The known objects in the hoard are eight items:

The first three items listed were the original items acquired by Rolfe, with the others being acquired later.

Besides these eight items, it appears likely that at least one other item originally was found with the above items:

There may have been other items that were found with the hoard, but their identification is not possible.

All content from Kiddle encyclopedia articles (including the article images and facts) can be freely used under Attribution-ShareAlike license, unless stated otherwise. Cite this article:
Canterbury-St Martin's hoard Facts for Kids. Kiddle Encyclopedia.