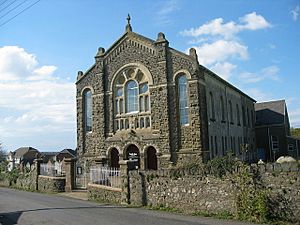 Capel y Crwys is an Independent chapel located on the Gower Peninsula in the village of Three Crosses, Swansea. It is the largest chapel on the Gower earning itself the colloquial name of Gower's "Cathedral". With a history of over two centuries it continues today with a popular membership and involvement in the local community. The chapel is a member of the Union of Welsh Independents

The first chapel was built on the site in 1788 and it was rebuilt in 1831. The current chapel building was built in 1877 to the design of John Humphrey, and extended in 1912. The chapel is a Grade II listed building. The village of Three Crosses has a history of nonconformism dating back to 1689.

All content from Kiddle encyclopedia articles (including the article images and facts) can be freely used under Attribution-ShareAlike license, unless stated otherwise. Cite this article:
Capel Y Crwys Facts for Kids. Kiddle Encyclopedia.