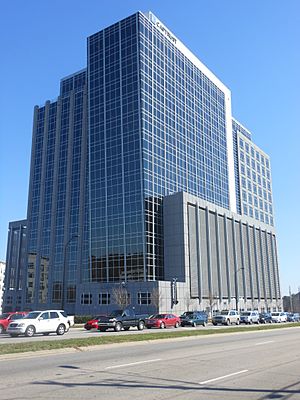 CAPTRUST Tower at North Hills is a 17-story 260 feet (79 m) mixed use skyscraper located at North Hills in Raleigh, North Carolina. The tower opened in the fall of 2009. It has 274,000 square feet (25,500 m2) of office space and 28,400 square feet (2,640 m2) of retail space. The tallest building in suburban Raleigh, it is named for CAPTRUST Financial Advisors, the first tenant, which uses 51,000 square feet (4,700 m2) on the top two floors for its headquarters. CAPTRUST Tower was built by Duke Realty Corp. of Indianapolis and Kane Realty Corp. of Raleigh. KSB realty Advisors of Newport Beach, California announced its $98.4 million purchase of the building January 31, 2013.

When the tower was announced in 2007, CAPTRUST Financial Advisors had 75 employees and managed $20 billion in assets, with plans to expand westward. The company advised companies with retirement plans as well as individuals. CAPTRUST is an employee-owned, independent investment research and fee-based advisory firm headquartered in Raleigh, North Carolina, with offices located across the U.S. 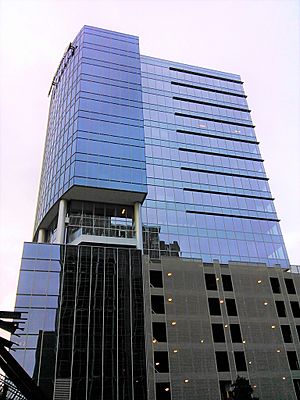 The side of the Bank of America Tower

All content from Kiddle encyclopedia articles (including the article images and facts) can be freely used under Attribution-ShareAlike license, unless stated otherwise. Cite this article:
Captrust Tower Facts for Kids. Kiddle Encyclopedia.