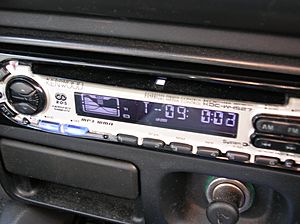 Vehicle audio is equipment installed in a car or other vehicle to provide in-car entertainment and information for the vehicle occupants. Until the 1950s it consisted of a simple AM radio. Additions since then have included FM radio (1952), CD players (1984), navigation systems, Bluetooth telephone integration, and smartphone controllers like CarPlay and Android Auto. Once controlled from the dashboard with a few buttons, they can now be controlled by steering wheel controls and voice commands.

Extremely loud sound systems in automobiles may violate the noise ordinance of some municipalities some of which have outlawed them. In 2002, the U.S. Department of Justice issued a guide to police officers on how to deal with problems associated with boom cars.

All content from Kiddle encyclopedia articles (including the article images and facts) can be freely used under Attribution-ShareAlike license, unless stated otherwise. Cite this article:
Car stereo Facts for Kids. Kiddle Encyclopedia.