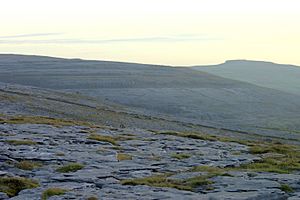 Karst landscape of the Burren

Carbonation is the process of carbon dioxide dissolving in a liquid. For example, carbon dioxide is added to flavored water under pressure to make it "fizz" as a carbonated water soft drink.

When rain passes through the atmosphere, it takes in or mixes with carbon dioxide, turning it into a weak carbonic acid. When the rain falls in limestone, it dissolves the calcium carbonate in the rock, turning it into calcium bicarbonate and taking it away. Holes and large cracks can form in the rock. Such a place is called karst. If a stream or river passes through it, it could be swallowed up by a hole called a swallow hole. It can go through a series of underground caves and may appear on the surface again. An example of a karst area is the Burren National Park, in County Clare, Ireland.

Carbon dioxide is weakly soluble in water, therefore it separates into a gas. The process of carbon dioxide bubbling out (effervescing) from a solution is represented by the following chemical reaction. This shows aqueous carbonic acid converts to carbon dioxide and water:

Carbonation also describes the incorporation of carbon dioxide into chemical compounds. Carbon-based life originates from a carbonation reaction that is most often catalysed by the enzyme RuBisCO. This carbonation process is so important that a significant fraction of leaf mass consists of this carbonating enzyme. 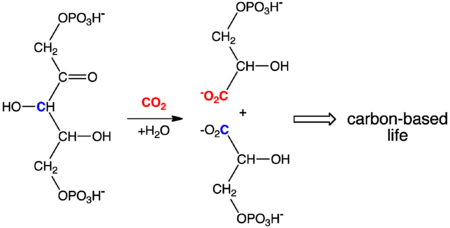 Carbonation of ribulose bisphosphate is the starting point of the incorporation of carbon dioxide into the biosphere.

All content from Kiddle encyclopedia articles (including the article images and facts) can be freely used under Attribution-ShareAlike license, unless stated otherwise. Cite this article:
Carbonation Facts for Kids. Kiddle Encyclopedia.