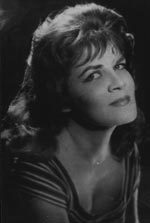 Oliver Labra studied law at the University of Havana. She was known as one of the most influential Cuban poets.

Oliver Labra won many national and international prizes including the National Poetry Prize (1950), National Literature Award (1997) and the José de Vasconcelos International Prize (2002). Me desordeno, amor, me desordeno might be her most famous poem.

All content from Kiddle encyclopedia articles (including the article images and facts) can be freely used under Attribution-ShareAlike license, unless stated otherwise. Cite this article:
Carilda Oliver Labra Facts for Kids. Kiddle Encyclopedia.