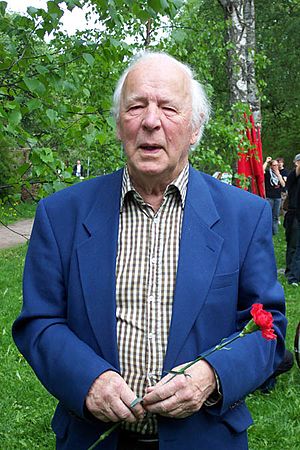 Carl-Henrik "C.-H." Hermansson (14 December 1917 – 26 July 2016) was a Swedish politician. He was born in Bollnäs, Sweden. He was chairman of the Communist Party of Sweden (during his leadership renamed to the Left Party – Communists) from 1964 to 1975 and member of parliament from 1963 to 1985. He was a major force in redirecting the Left Party Communists policies away from Moscow loyalism towards Eurocommunism and Scandinavian Popular Socialism.

At the time of Joseph Stalin's death in 1953, Hermansson heaped praise on Stalin's greatness in a few speeches, something he was regularly reminded of by journalists and political opponents, even though he repeatedly made public his regret for the things said.

All content from Kiddle encyclopedia articles (including the article images and facts) can be freely used under Attribution-ShareAlike license, unless stated otherwise. Cite this article:
Carl-Henrik Hermansson Facts for Kids. Kiddle Encyclopedia.