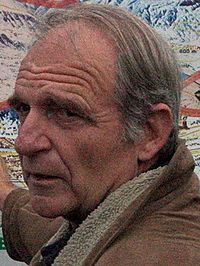 Carles Bosch Arisó (1945 – ) is a Spanish journalist and movie director. He was born in Barcelona. He co-directed and co-wrote the Academy Award-nominated movie Balseros (2002). In the 1970s, he worked as a journalist for Interviú. He was a war correspondent for Televisió de Catalunya during the Gulf War.

All content from Kiddle encyclopedia articles (including the article images and facts) can be freely used under Attribution-ShareAlike license, unless stated otherwise. Cite this article:
Carles Bosch Facts for Kids. Kiddle Encyclopedia.