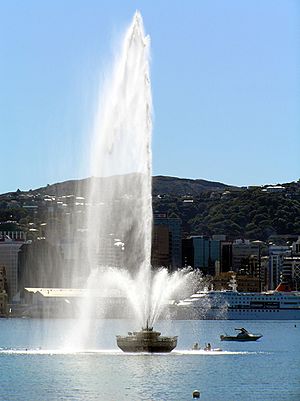 The Carter Fountain in 2005

The Carter Fountain is a distinctive feature 150 metres (490 ft) out in Wellington Harbour from Oriental Bay. Installed in 1973, it was named after its donor, Hugh Carter, who drowned only days after the fountain's inauguration. 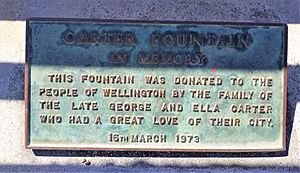 The Carter Fountain was a gift to the city of Wellington from local resident and businessman Hugh Carter, as a tribute to his parents George and Ella Carter and the people of Wellington. A plaque was installed on the band rotunda saying: "Carter Fountain. In Memory. This fountain was donated to the people of Wellington by the family of the late George and Ella Carter, who had a great love of their city. 16th March 1973". Carter was inspired by the Jet d'Eau fountain he saw in Geneva in the early 1960s. Construction began in 1972 and cost NZ$75,000. There was some controversy when the project was announced as some residents objected to the fountain on aesthetic reasons or because it might interfere with rowing, or thought the money it cost could have been better spent elsewhere.

The fountain was originally maintained by the Wellington Harbour Board, and with the 1989 local government reforms, this responsibility transferred to the Wellington City Council. 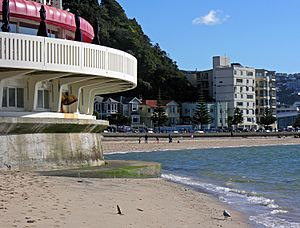 The fountain spouts water 16 metres (52 ft) into the air. Following complaints from local residents about salt spray, a wind sensor was installed on the nearby band rotunda that prevents the fountain from operating above a given wind speed; sources vary whether this is 8 or 10 knots (15 or 19 km/h; 9.2 or 11.5 mph). The band rotunda also holds the land-based electrical components for the fountain.

Monthly maintenance is carried out by an electrician, who reaches the fountain in a row boat. Twice a year, divers check on the submerged pump. The annual maintenance costs NZ$45,000, of which NZ$20,000 is for electricity. The cost for replacing the pump in 2009 was NZ$29,000, during which time the fountain was out of operation for half a year. Eight floodlights are used to light and colour the fountain. The halogen lights were replaced in 2013 by LED light at a cost of NZ$21,000, with the new lights lasting up to 50,000 hours compared to 2,000 hours previously, and being able to be remote controlled.

The fountain is operated up to four times a day:

All content from Kiddle encyclopedia articles (including the article images and facts) can be freely used under Attribution-ShareAlike license, unless stated otherwise. Cite this article:
Carter Fountain Facts for Kids. Kiddle Encyclopedia.