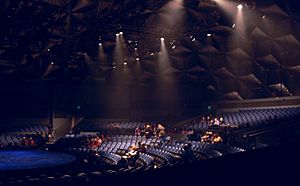 Casa Mañana Theatre (also known as the "House of Tomorrow") is located in the Fort Worth Cultural District, Texas. Originally an outdoor amphitheater, Casa opened in 1936 as part of the official Texas Centennial Celebration. 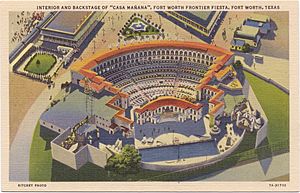 After Dallas was selected to be the site of the official Texas Centennial Celebration in 1936, Amon G. Carter began making plans for a celebration in Fort Worth. Several acres of a nearby cow pasture were to become a midway of exhibits, sideshows, a Wild West show and a musical circus. At the center of the complex was to be a large outdoor amphitheater and restaurant called Casa Mañana, “The House Of Tomorrow.”

Carter hired Broadway producer Billy Rose to produce the “Show of Shows” for Fort Worth. In just a few weeks, the cow pasture was transformed into Casa Mañana, housing the world's largest revolving stage and accommodating 4,000 guests. A large moat surrounded the stage and fountains projected a wall of water, which doubled as the stage curtain. The show was so successful that plans were made to bring it back each summer for four consecutive years. Rising costs and the threat of World War II, however, derailed the scheme, and eventually the entire complex was dismantled and recycled for the war effort. Overall Casa Manaña is a great theater.

The dream of Casa Mañana was reborn in the fall of 1957 by the Fort Worth Opera Association's president, James H. Snowden, Jr., and manager, Melvin O. Dacus. At their request, the city of Fort Worth created a non-profit corporation to build and operate a theatre complex, primarily focused on the production of Broadway musicals. With a budget of $500,000, the project was approved by the city council on January 14, 1958.

Construction began on March 13, and a record-breaking 114 days later Casa Mañana Theatre was completed as a fully enclosed, air-conditioned, aluminum-domed theatre. The theatre's black-tie opening with a production of Can-Can on July 5, 1958, introduced audiences to the 1,805-seat house and to theatre-in-the-round, a stage configuration featuring a stage surrounded by the audience. With no backstage area, the actors and stagehands would use the surrounding concourse and aisles to move set pieces, props and other materials on and off stage.

Casa Mañana through the years

Casa Mañana Musicals, Inc., the non-profit organization that managed the theatre, was run by a volunteer board of directors and General Manager Melvin O. Dacus. In 1962, programming was expanded with the introduction of the Children's Playhouse, a professional theatre series geared toward North Texas children. Each year since, nearly 150,000 parents, children, teachers and students have attended these popular shows.

Soon after the Children's Playhouse was established, Casa Mañana's Theatre School opened to train children in the performing arts. Today, classes for children ages four and older are taught by theatre professionals year-round in acting, musical theatre, dance and voice.

After a decade of planning and fundraising, Casa Mañana Theatre was renovated in 2003. The renovation also added space for the expansion of Casa's educational programs and for the accommodation of community meetings, performances and other events.

In 2004, recognizing that the title “Musicals” did not accurately reflect the broad contributions the organization was making to the North Texas community, the board of directors voted to officially change the company's name to Casa Mañana, Inc.

All content from Kiddle encyclopedia articles (including the article images and facts) can be freely used under Attribution-ShareAlike license, unless stated otherwise. Cite this article:
Casa Mañana Facts for Kids. Kiddle Encyclopedia.