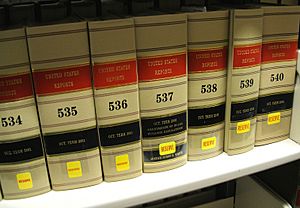 The United States Reports is the official reporter of the Supreme Court of the United States. Case citation is a system used by legal professionals to identify past court case decisions. These are found either in series of books called reporters or law reports, or in a neutral style that identifies a decision regardless of where it is reported. Case citations are formatted differently in different jurisdictions, but generally contain the same key information.

A legal citation is a "reference to a legal precedent or authority, such as a case, statute, or work, that either agrees with or contradicts a given position". Where cases are published on paper, the citation usually contains the following information:

In some report series, for example in England and Australia, volumes are not numbered independently of the year. So the year and volume number (usually no greater than 4) are required to identify which book of the series has the case reported within its covers. In such citations, it is usual in these jurisdictions to apply square brackets "[year]" to the year (which may not be the year that the case was decided, For example, a case decided in December 2001 may have been reported in 2002).

The Internet brought with it the opportunity for courts to publish their decisions on websites. Decisions of many courts from all over the world can now be found through the website WorldLII and its member institutes.

Most court decisions are not published on paper. The large number of court decisions found online resulted in a flood of information. The result was that a medium-neutral citation system was adopted. This usually contains the following information:

Rather than utilizing page numbers for "pinpoint references", which would depend upon particular printers and browsers, pinpoint quotations refer to paragraph numbers.

The conjunction "versus" is abbreviated to "v" in Commonwealth countries and to "v." in the United States.

In common law countries with an adversarial system of justice, the names of the opposing parties are separated in the case title by the abbreviation v. The abbreviation represents the Latin word versus, which means against. When case titles are read out loud, the v. can be pronounced, depending on the context, as and, against, versus, or vee.

All content from Kiddle encyclopedia articles (including the article images and facts) can be freely used under Attribution-ShareAlike license, unless stated otherwise. Cite this article:
Case citation Facts for Kids. Kiddle Encyclopedia.