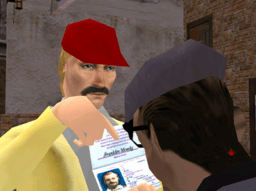 Gabriel Knight, wearing the cat hair mustache and trying to pose as the man on the driver's license

The cat hair mustache puzzle is a puzzle in the video game Gabriel Knight 3: Blood of the Sacred, Blood of the Damned. The puzzle's name is owed to the use of cat hair as a fake mustache, which protagonist Gabriel Knight uses as part of a disguise in order to steal a man's motorcycle rental. The puzzle was created by the game's producer, Steven Hill, following a puzzle being worked on by the game's creator, Jane Jensen, having to be cut due to budgetary reasons. The designers disliked the puzzle, but because of time constraints, it had to be left in.

The puzzle has received generally negative reception, identified as one of the causes of adventure games becoming less popular due to it being too obtuse and frustrating. Game designer Erik Wolpaw was highly critical of it, blaming Jane Jensen for it despite her non-involvement. Wolpaw's article caused Jensen to face harassment from people who thought her a poor game designer for it, a portion whom Jensen noted had not played the game.

In Gabriel Knight 3: Blood of the Sacred, Blood of the Damned, players control protagonist Gabriel Knight. At one point during the game, Gabriel is tasked with impersonating another man in order to take his motorcycle rental. In order to do this, Gabriel must collect a variety of items. Gabriel creates a mustache using masking tape, which he puts a piece of on a shed door. Gabriel uses a hose to spray a cat which is on top of a fence, causing the cat to run through the shed door. This causes part of the cat's fur to be torn off, which he takes. Gabriel then must distract the man by getting him to come downstairs and use a piece of candy to distract him, causing the man to bend over while outside of his room and allowing Gabriel to steal his passport. Gabriel then heads to the man's room in order to steal his gold coat and don it, along with a red cap he finds in the lost and found to hide that he had hair, unlike the man. Gabriel then uses a packet of maple syrup to adhere the fur to his face, creating a false mustache. Using a magic marker, Gabriel then adds a fake mustache to the passport in order to obscure the differences between their faces. He then returns, disguise complete, and successfully takes the man's motorcycle rental.

The puzzle was created by Gabriel Knight 3 producer Steven Hill, as a result of a puzzle created by the game's creator, Jane Jensen, needing to be removed due to budget concerns. The cat hair mustache puzzle was unpopular with the game's lead technical designer, Scott Bilas, as well as other members of the development team, but was included due to time constraints. Jensen attributed the difficulty of the cat hair mustache puzzle to both the length of the puzzle and the lack of hints, though felt it was overblown, even though she didn't like it herself.

All content from Kiddle encyclopedia articles (including the article images and facts) can be freely used under Attribution-ShareAlike license, unless stated otherwise. Cite this article:
Cat hair mustache puzzle Facts for Kids. Kiddle Encyclopedia.