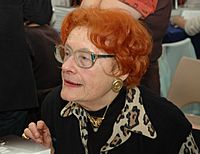 She published several novels, five autobiographical works, two collections of poetry and two plays. She also adapted several of her works for movies. In 1977, she received the Grand prix de littérature de la SGDL for the whole of her work.

Paysan was named an Officier in the French Legion of Honour in 2011.

All content from Kiddle encyclopedia articles (including the article images and facts) can be freely used under Attribution-ShareAlike license, unless stated otherwise. Cite this article:
Catherine Paysan Facts for Kids. Kiddle Encyclopedia.