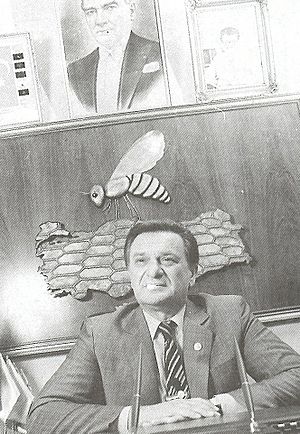 Cavit Şadi Pehlivanoğlu (1927 – 21 November 2015) was a Turkish statesman. He served as a legislator of the Grand National Assembly of Turkey for three terms between 1961 through 1996. He was the first as a member of Justice Party (Turkey) and then as the Vice President of Motherland Party (Turkey), that he founded together with President Turgut Özal and others.

Pehlivanoğlu died on November 21, 2015 in Ordu, Turkey from complications of pneumonia, aged 88.

All content from Kiddle encyclopedia articles (including the article images and facts) can be freely used under Attribution-ShareAlike license, unless stated otherwise. Cite this article:
Cavit Şadi Pehlivanoğlu Facts for Kids. Kiddle Encyclopedia.