Cayuga Park is a neighborhood park and playground in San Francisco, at the edge of the Cayuga Terrace neighborhood. Its history, location and aesthetics make it unique among the parks of San Francisco. 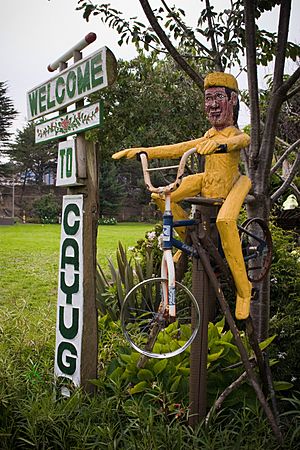 The aesthetics of Cayuga Park is largely the creation of Demetrio Braceros, an employee of the San Francisco Recreation and Park Department. Braceros worked on the park for over 20 years, transforming a barren landscape into a park that features lush vegetation, trails, "themed gardens" and, most prominently, over 375 figurines, totem poles and statues as well as several observation decks, all carved from wood by Braceros.

After emigrating from the Philippines in 1973, Braceros worked for a San Francisco law firm but soon applied for a job as a gardener at the Recreation and Park Department. In 1986, Braceros was assigned to the 4-acre (16,000 m2) Cayuga Park, with the mission to "change the atmosphere."

All content from Kiddle encyclopedia articles (including the article images and facts) can be freely used under Attribution-ShareAlike license, unless stated otherwise. Cite this article:
Cayuga Park Facts for Kids. Kiddle Encyclopedia.