The Cedar Falls Ice House is an historic building located in Cedar Falls, Iowa, United States. It was built in 1921 and has been listed on the National Register of Historic Places since 1977. The building currently serves as the Ice House Museum. 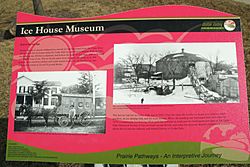 Information plaque located
outside of the Ice House

The building is a true round barn structure that measures 100 feet (30 m) in diameter and 30 feet (9.1 m) high. It is constructed of hollow clay tiles and features an aerator and a two-pitch roof. The roof is supported by a center pole and the walls of the structure. When used as an ice house it could hold between 6,000 and 8,000 tons of ice.

All content from Kiddle encyclopedia articles (including the article images and facts) can be freely used under Attribution-ShareAlike license, unless stated otherwise. Cite this article:
Cedar Falls Ice House Facts for Kids. Kiddle Encyclopedia.