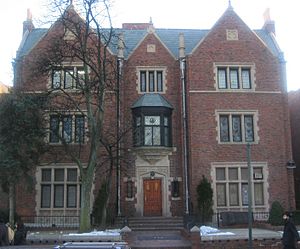 Chabad-Lubavitch is the name of a sect of Hasidic Jews. It is one of the largest groups of Hasidic Jews in the world. Many of the Lubavitch Hasidim live in the United States or Israel. The Lubavitch world headquarters is in Crown Heights, a neighborhood in Brooklyn, New York.

The Chabad movement was started by Rabbi Schneur Zalman of Liadi in Eastern Europe during the late 1700s. He named his 'Chabad' because in Hebrew it is an acronym for Wisdom, Understanding, and Knowledge. 'Lubavitch' was the name of the town in Russia where the movement was at from the time of the second Lubavitcher Rebbe (leader), Rabbi Dov Ber Schneuri, through the sixth, Rabbi Joseph Isaac Schneersohn.

All content from Kiddle encyclopedia articles (including the article images and facts) can be freely used under Attribution-ShareAlike license, unless stated otherwise. Cite this article:
Chabad-Lubavitch Facts for Kids. Kiddle Encyclopedia.