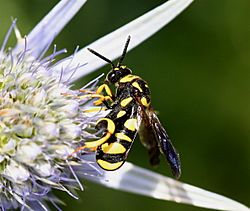 Leucospis, a parasite of stinging wasps 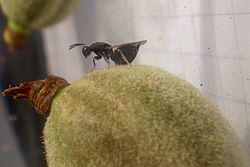 A chalcid wasp, unusual in laying its eggs on plant material

The chalcid wasps are formally called the Chalcidoidea. They are a superfamily of parasitoid wasps. They have a huge number of species, estimated as over 500,000 (half a million). The superfamily includes 22 families. The data included morphology and ribosomal 18S data. The researchers comment that only about 22,506 species of the half-million have been formally described.

Most of the species are parasitic on other kinds of insect. They attack the egg or larval stages of at least 12 different insect orders. When that insect is itself a parasitoid, then the chalcid is called a hyperparasitoid. Chalcids are sometimes used to control crop pests. A few chalcids actually eat plants, and the most famous of these are the fig wasps.

There are 19 living families of chalcids.

All content from Kiddle encyclopedia articles (including the article images and facts) can be freely used under Attribution-ShareAlike license, unless stated otherwise. Cite this article:
Chalcid wasp Facts for Kids. Kiddle Encyclopedia.