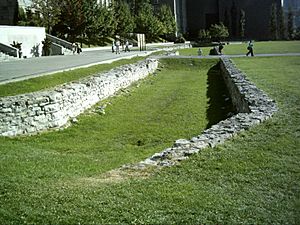 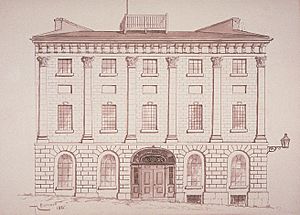 Formerly a military parade ground, the park had previously been the site of Montreal's fortifications, which were demolished at the beginning of the 19th century soon after Montreal City Hall and the old courthouse were built. It had served as a municipal parking lot until being restored as a park in 1980s. At that time, the foundations of Montreal's city walls were discovered and restored.

The site's name commemorates its former military purpose; Mars was the Roman god of war and campus Martius was a Latin term for a military exercise ground. The walls now standing on site were built to show the location of the original walls used to protect the city.

The area is bordered by the Montreal City Hall, the old and new courthouses and the Champ-de-Mars Metro station.

All content from Kiddle encyclopedia articles (including the article images and facts) can be freely used under Attribution-ShareAlike license, unless stated otherwise. Cite this article:
Champ de Mars (Montreal) Facts for Kids. Kiddle Encyclopedia.