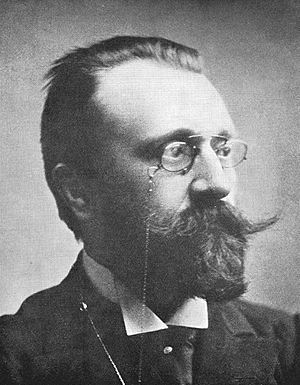 After his secondary education, in French, at Ninove, he went to the Klein seminarie in Mechelen. Here he wrote his first poems, which he published in one volume as Klimoprankske (1875). He studied law at the Catholic University of Leuven, where he founded, together with Albrecht Rodenbach, Het Pennoen. In 1880 he was awarded the Quinquennial Prize for Flemish Literature for his poems which were published in Gedichten.

He started his professional career as a teacher at the Koninklijk Atheneum (E: Royal Atheneum ) in Antwerp. In 1904 he was appointed Director of the Museum of Fine Arts in Antwerp, and a year later he was one of the co-founders of the illustrated magazine De Vlaamse Gids. In 1919, he resigned his position as Director of the museum because he had been accused of Activism during World War I. He became chief editor of the newspaper De Schelde, where among his employees were Paul Van Ostaijen and Alice Nahon.

All content from Kiddle encyclopedia articles (including the article images and facts) can be freely used under Attribution-ShareAlike license, unless stated otherwise. Cite this article:
Charles Polydore de Mont Facts for Kids. Kiddle Encyclopedia.