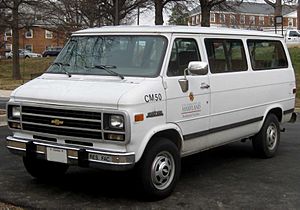 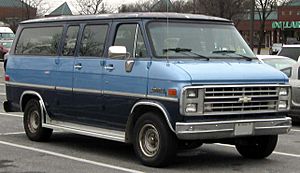 Chevrolet Van-simply called Chevy Van-refers to passenger or cargo vans which were full size. The vans went by the names of Sport Van, Beauville and Chevrolet G-Series. GMC's version of the vans were called Vandura and Rally Wagon. The vehicles were first made around 1964 under Chevrolet and GMC divisions of General Motors. They were discontinued after 1996. The post 1996 replacements were the Chevrolet Express and GMC Savana.

All content from Kiddle encyclopedia articles (including the article images and facts) can be freely used under Attribution-ShareAlike license, unless stated otherwise. Cite this article:
Chevrolet Van Facts for Kids. Kiddle Encyclopedia.