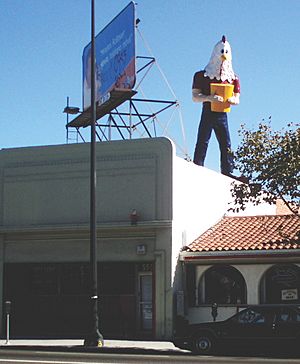 Chicken Boy is a landmark statue on the historic U.S. Route 66 (North Figueroa Street) in the Highland Park, California area of Los Angeles. The colorful 22-foot tall fiberglass statue was recognized by California Governor Arnold Schwarzenegger with the Governor's Historic Preservation Award in 2010. 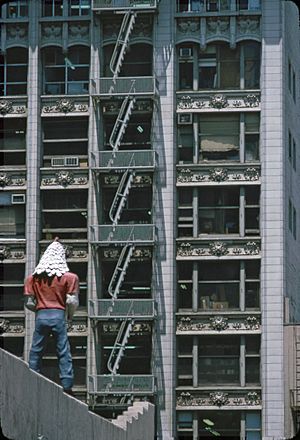 Chicken Boy at the original location in July 1977

Chicken Boy was first perched atop a fried chicken restaurant in downtown Los Angeles on Broadway (also Historic Route 66) between 4th and 5th streets, near L.A.'s Grand Central Market in the 1960s. At that time, International Fiberglass Company, in Venice, California, was manufacturing the more familiar roadside Paul Bunyan and Muffler Man statues for use as outdoor advertising. The Los Angeles chicken restaurant bought one and hired an artist to customize it. A chicken head was fabricated to replace the man's head. The arms were re-worked to face forward and hold a bucket, rather than as the axe-wielding original. The iconic downtown statue remained in place until 1984 when the restaurant owner died. The statue was given to Amy Inouye, after many queries and requests, and it went into storage until a suitable location could be found, as it turned out some 20 years later.

Inouye, a Los Angeles art director, saved, then stored Chicken Boy and in 2007 moved the statue to its current location at 5558 North Figueroa. Inouye's design firm, Future Studio, had relocated to a commercial space that had a reinforced roof strong enough to support the statue. The Chicken Boy statue was recovered as a result of community effort and donated funds.

Initially saved by designer Amy Inouye when its downtown fast-food home was leveled, Chicken Boy languished in storage for two decades -- its head in one unit, its torso in another. Finally, the city allowed her to install it atop her Highland Park studio as an "art installation," writes L.A. Times columnist Steve Harvey.

There are other notable customized statues (known as Muffler Men) still standing: The Gemini Giant in Wilmington, Illinois, holds a rocket ship and wears a helmet; Tall Paul in Atlanta, Illinois, holds a giant hot dog; and El Salsero in Malibu, California, wears a sombrero and holds a serving tray. Road-trip and pop culture fanatics seek them out and catalogue them on websites.

All content from Kiddle encyclopedia articles (including the article images and facts) can be freely used under Attribution-ShareAlike license, unless stated otherwise. Cite this article:
Chicken Boy Facts for Kids. Kiddle Encyclopedia.