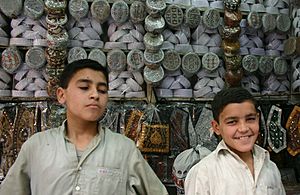 Pakistani children working in a shop.

Child labour is one of the major problems of Pakistan: The Human Rights Commission of Pakistan estimated in the 1990s, that 11 million children were working in the country; half of them were under the age of ten. There are a number of laws which regulate the conditions under which children are allowed to work. These laws include:

The problem is that these laws are ignored most of the time. Some 11 million children, aged four to fourteen, keep the country's factories operating, often working in bad conditions.

In December 2014, the U.S. Department of Labor's List of Goods Produced by Child Labor or Forced Labor reported nine goods of which six are produced by child labourers in Pakistan. These include the making of bricks, carpets, glass bangles, leather and surgical instruments, as well as coal mining.

All content from Kiddle encyclopedia articles (including the article images and facts) can be freely used under Attribution-ShareAlike license, unless stated otherwise. Cite this article:
Child labour in Pakistan Facts for Kids. Kiddle Encyclopedia.