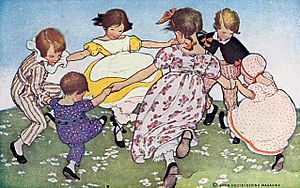 Illustration by Jessie Willcox Smith, from The Little Mother Goose (1912)

Childlore is the folklore or folk culture of children and young people. It includes, for example, rhymes and games played in the school playground.

As a branch of folklore, childlore is concerned with those activities which are learned and passed on by children to other children. The stories and games taught by adults to children are not considered childlore except insofar as the children adapt and make them their own. In western culture most folklorists are concerned with children after they join their peers in elementary school or kindergarten. The traditions of childhood generally stop after the child enters intermediate school, which coincides with puberty and adolescence.

All content from Kiddle encyclopedia articles (including the article images and facts) can be freely used under Attribution-ShareAlike license, unless stated otherwise. Cite this article:
Childlore Facts for Kids. Kiddle Encyclopedia.