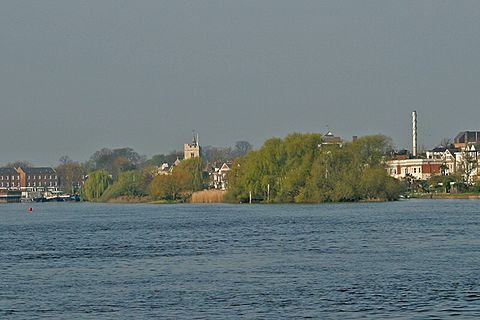 Chiswick Eyot with St Nicholas Church, buildings along Chiswick Mall and Fuller's Brewery in the background

Chiswick Eyot is a 3.266-acre (1.3 ha) narrow, uninhabited ait (river island) in the River Thames. It is a tree- and reed-covered rise on the Tideway by Chiswick, in the Borough of Hounslow, London, England and is overlooked by St Nicholas Church, Chiswick, the Mall (promenade street) of Hammersmith and by some of the Barnes riverside on the far bank. Excluding tidal mudflats and sandbanks, it is the most downstream island purely on the Thames itself (as the Isle of Sheppey, Canvey Island and two nearby islets in the estuary are co-fed by creeks and in the case of Sheppey by complex mouths of the Medway).

It is beside The Championship Course and marks the approximate half-way point of The Boat Races (OUBC versus CUBC Men's and Women's first eights (1st 8+s) races) and the country's international Head of the River Race among others. A green pole stands on one end used for timings by rowers of that course, at the southwest, church end of the island. Small craft can pass between it and (the) Chiswick Mall on the Middlesex (left, generally north) bank for about two hours at high tide, but the small channel is generally impassable otherwise — at low tide it is possible to walk to it as it is a tidal island. 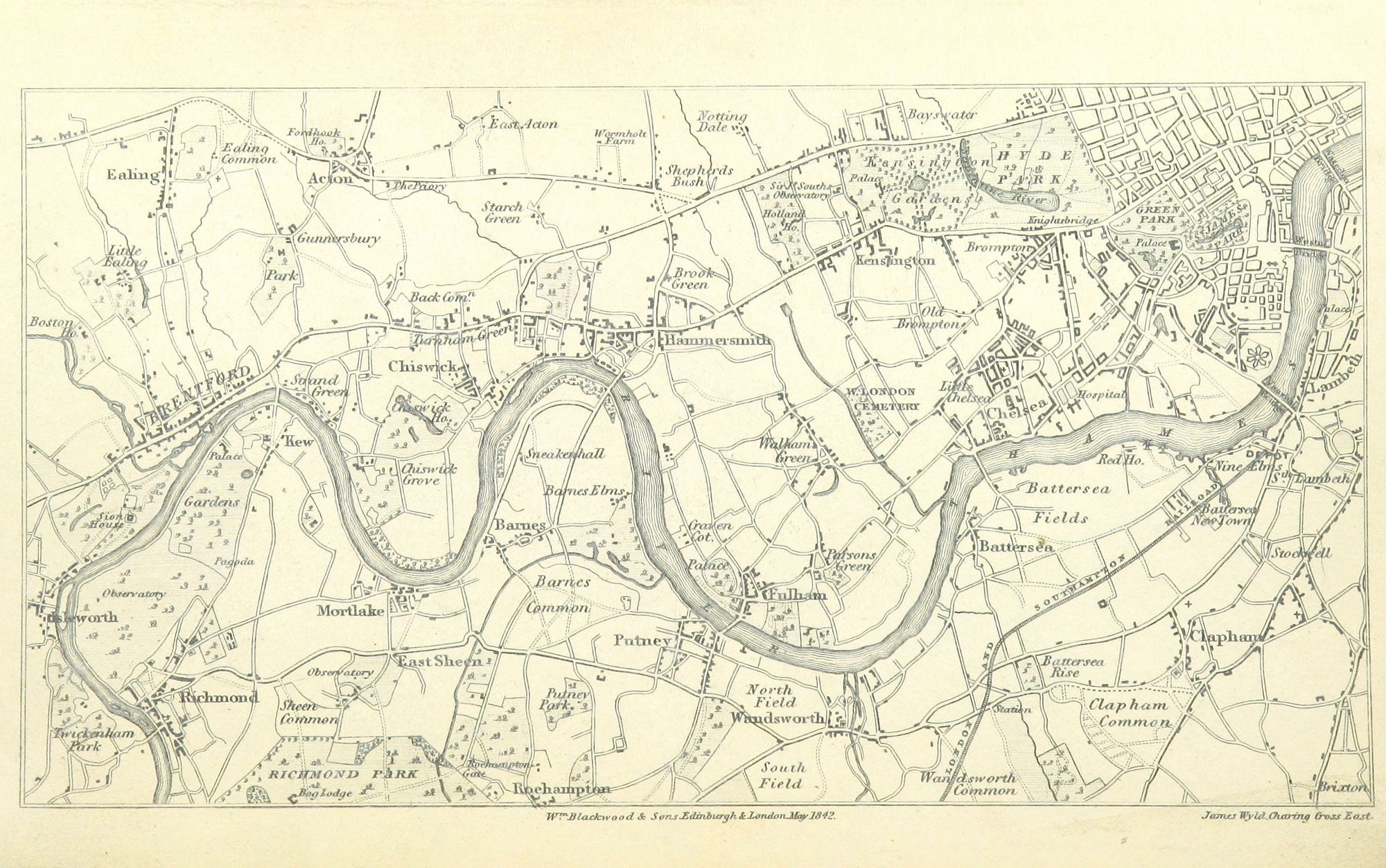 The island shown in 1842, as shown in later maps it has been slightly eroded in the places mentioned in this article

Chiswick Eyot is one of 43 unbridged tidal islands which can be walked to from the mainland of Great Britain. The 3.266-acre (1.3 ha) eyot was long-owned by the rectory of Chiswick and its natural successors the Ecclesiastical Commissioners until 1934 when ownership passed to the local council. Little is known of its archaeology. St. Nicholas Church, Chiswick, whose tower was built in the 15th century, is 200m west of the island. Thus an early medieval parish church is beside it as with Isleworth Ait, Eel Pie Island (Twickenham Ait) and others upstream.

The eyot was used during the industrial revolution mostly for the growing of grass and osiers (basket willows, used for basketry, furniture, cart-making, as well as cattle fodder). Its south-west end, opposite end and east has become indented. The island is submerged (excluding trees) at high tide.

The London Borough of Hounslow declared the island a local nature reserve of Greater London in 1993.

All content from Kiddle encyclopedia articles (including the article images and facts) can be freely used under Attribution-ShareAlike license, unless stated otherwise. Cite this article:
Chiswick Eyot Facts for Kids. Kiddle Encyclopedia.