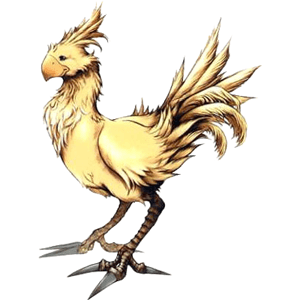 They first appeared in Final Fantasy 2 and were used in most Final Fantasy sequels after that. They can be used to travel around the game, or play mini-games.The origin of Chocobo is 'Kyoro-chan'.Chocobo likes 'Vegetable of Gizarle'. They have special smell.

All content from Kiddle encyclopedia articles (including the article images and facts) can be freely used under Attribution-ShareAlike license, unless stated otherwise. Cite this article:
Chocobo Facts for Kids. Kiddle Encyclopedia.