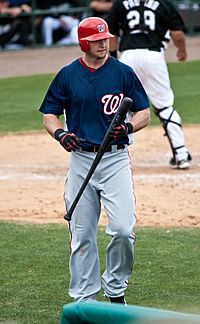 Christopher Edwin Duncan (May 5, 1981 – September 6, 2019) was an American Major League Baseball left fielder and first baseman and radio personality. Duncan was born in Tucson, Arizona. He played for the St. Louis Cardinals from 2005 to 2009. Duncan worked for ESPN Radio until 2019.

On January 9, 2019 it was announced that Duncan was retiring after being diagnosed with glioblastoma. He died eight months later on September 6 in Tuscon at the age of 38.

All content from Kiddle encyclopedia articles (including the article images and facts) can be freely used under Attribution-ShareAlike license, unless stated otherwise. Cite this article:
Chris Duncan Facts for Kids. Kiddle Encyclopedia.