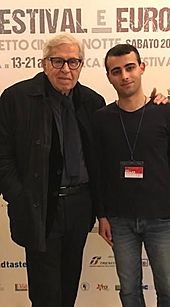 Christian Orlandi (born 7 September 1998) is an Italian graphic designer and director. He was born in Pistoia. Orlandi began his career in professional films as a graphic designer. The wheel of Khadi and thriller drama Darkness (winner film of a Nastro d'Argento) are among the films he has worked on.

All content from Kiddle encyclopedia articles (including the article images and facts) can be freely used under Attribution-ShareAlike license, unless stated otherwise. Cite this article:
Christian Orlandi Facts for Kids. Kiddle Encyclopedia.