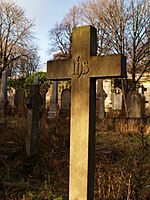 A Christogram placed on a grave cross 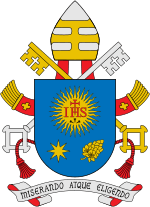 IHS on the coat of arms of Pope Francis.

The Christogram IHS is a monogram symbolizing Jesus Christ.

From Greek it is an abbreviation of the name IHΣΟΥΣ (Jesus).

In Eastern Orthodox Church the Christogram is composed with letters X, P, I and X arranged into the cross. They are the first letters of one from two words in Greek language: Christ and Jesus Christ.

In the Western culture there exist the compositions: "IHS" and also "IHC" being the first letters (iota-eta-sigma) of the name Jesus in Greek alphabet: ΙΗΣΟΥΣ (Ίησοῦς or ΙΗϹΟΥϹ with lunated sigma). The abbreviation in form "IHS" appeared in first time on the coins of Justinian II on the turn of the 7th and 8th centuries.

The order of Jesuits, in other words the Society of Jesus (Societas Iesu), adopted IHS as its fixed emblem - the symbol in 17th century. There appeared also Latin interpretations of the abbreviation IHS, among others:

These developed inscriptions were most likely formed because in the Middle Ages people mistakenly read the letter E as H.

According to a legend, this inscription with the cross was seen by emperor Constantine the Great in his sleep before the battle against Maxentius in 312 on the Ponte Milvio.

Commentators unfriendly to the Catholic Church sometimes interpret the abbreviation IHS as derived from the solar idols of the Egyptian mythology: Isis, Horus and Seth. Nevertheless, present scientific knowledge does not confirm such interpretations.

All content from Kiddle encyclopedia articles (including the article images and facts) can be freely used under Attribution-ShareAlike license, unless stated otherwise. Cite this article:
Christogram IHS Facts for Kids. Kiddle Encyclopedia.