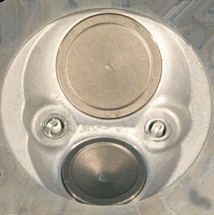 The Chrysler Hemi engine, known by the trademark Hemi nickname, is a series of V6 and V8 engines built by Chrysler with a hemispherical combustion chamber. Three different types of Hemi engines have been built by Chrysler for automobiles. The first (known as the Chrysler FirePower engine) from 1951 to 1958. The second type was made from 1964 to 1971. The third beginning in 2003. Although Chrysler is most identified with the use of "Hemi" as marketing term, many other auto and truck manufacturers have used similar designs. In general the Hemi engines are smaller and more powerful than older engine designs. They are also less expensive to build. They can produce a great amount of torque and horsepower for their size.

During the 1970s and 1980s, Chrysler also used the Hemi name for their Australian-made Hemi-6 Engine and applied it to the 4-cylinder Mitsubishi 2.6L engine. It was installed in various North American market vehicles.

All content from Kiddle encyclopedia articles (including the article images and facts) can be freely used under Attribution-ShareAlike license, unless stated otherwise. Cite this article:
Chrysler Hemi engine Facts for Kids. Kiddle Encyclopedia.