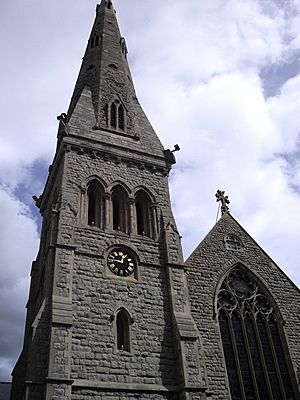 St Yeghiche Armenian Church (Armenian: Սուրբ Եղիշե եկեղեցի) is the largest church of the Armenian Apostolic Church in Great Britain. It faces Cranley Gardens, South Kensington, London. The church was privately built in 1867 as St. Peter's Anglican Church by highly successful developer, Charles James Freake, whose widow came to live (as one of her homes) in one of the houses of the street in later life. It became the parish church of Kensington (St Peter's).

By an Order in Council of December 1972 Saint Peter's was declared redundant with the intention that the building be leased to the Armenian Orthodox Church. Anglican services ceased in January 1973.

The building was purchased by a benefactor in 1998 and restored, with the addition of features required by the Armenian Divine Liturgy. Another Armenian church in Kensington, of the traditional Armenian style, is St Sarkis.

All content from Kiddle encyclopedia articles (including the article images and facts) can be freely used under Attribution-ShareAlike license, unless stated otherwise. Cite this article:
Church of St Yeghiche, South Kensington Facts for Kids. Kiddle Encyclopedia.