Church of the Cross facts for kids

Kids Encyclopedia Facts
For other uses, see Church of the Cross (disambiguation). 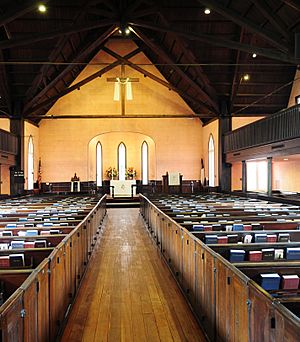 The Church of the Cross is a historic church on Calhoun Street in Bluffton, South Carolina.

It was built in 1857 and added to the National Register in 1975. It is currently in the Anglican Diocese of South Carolina and part of a larger Church of the Cross campus.

Formal worship in the Bluffton area traces its roots to the establishment in 1767 of St. Luke's Parish, where a church was built near Pritchardville in 1787. Service on “The Bluff” of the May River first took place in the early 1830s. The young town of Bluffton was a summer resort for area and inland planters and a stop on the ferry route between Savannah and Beaufort. By 1842, a chapel was built near the current location of The Church of the Cross.

In July 1857, the present building was consecrated. Architect E. B. White designed a structure described then as a “handsome cruciform Gothic building”, which indeed it remains today. Fanned arches with a look of palmettos top its mullioned windows that are framed by latticed shutters. The builders sent to England for the rose-colored glass in the windows. Inside, soft-pink scored plaster enhances the warm light. Exposed pine timbers evoke power and stability.

In 1863, Federal troops marched into Bluffton burning most of the town. Although the church was spared, its congregation fled. Services on The Bluff resumed in 1870, when the Rev. E. E. Bellinger arrived and oversaw repairs.

In 1892, the roof was replaced, but the deadly hurricane of 1898 damaged it and the rest of the building. By February 1900, all was repaired. Workers remodeled the chancel and fashioned from the original pulpit and desk a walnut altar with a stone top, a lectern and a prayer desk. A chapel area was created in the Narthex which was easy to heat for the sparse winter congregation.

The National Register of Historic Places has listed The Church of the Cross since 1975. In keeping with the church's rapid growth, members built the first rectory in 1986. With continuing growth that the church has experienced in recent years, this building became the church business office in 2001.

In 1997, the Narthex wall was moved back to its original location, expanding nave seating for the growing congregation. Stairs now lead up to the renovated balcony above, which is home to the choir and the beautiful English pipe organ installed in 1999.

The worship department is, like the church itself, rooted in the doctrine and practice of the Anglican Church, and based in a blend of the Book of Common Prayer and contemporary worship. Five services are held each week:

All content from Kiddle encyclopedia articles (including the article images and facts) can be freely used under Attribution-ShareAlike license, unless stated otherwise. Cite this article:
Church of the Cross Facts for Kids. Kiddle Encyclopedia.