The Cider Mill Playhouse in Endicott, New York, was a professional theater producing comedies, dramas and musicals. It was a member of the Theatre Communications Group. and operated as a Small Professional Theatre, Level 5, by annual contract with Actors' Equity Association.

In the early 1970s, Binghamton University (then known as "SUNY B") professor and soon to be theater department chairman, Dr. John Bielenberg sought to expand the theater department venue to an off-campus site, first, to enhance "town-gown" presence, and second, and most important, to give the department's students more opportunities to practice and hone their craft.

In 1991, after funding from the university was withdrawn, Cider Mill Playhouse incorporates as a 501c3 charitable organization which it remains today.

Dr. Bielenberg and his colleagues found The Cider Mill, an apple warehouse on South Nanticoke in the Village of Endicott. After some discussions, Mill owner Orlando Ciotoli agreed and, on a handshake, the Playhouse was launched. 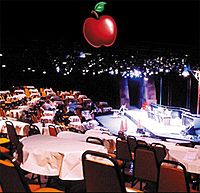 Early productions included Company, Sleuth, Night Must Fall, A Funny Thing Happened on the Way to the Forum, Of Mice and Men, Whose Life Is It Anyway, Da, Agnes of God, South Pacific, A Raisin in the Sun, Equus, The Last meeting of the Knights of the White Magnolia, and others. "The professional nature of the theater was all important to us," recalled Dr. John Bielenberg, now-retired BU Theater Department Chairman. "The students were able to work with the professionals, whom we hired as actors and directors, in an atmosphere that they would find in their theater careers."

Cider Mill mounts an annual production of Charles Dickens' A Christmas Carol. Starting in 1982, Cider Mill Playhouse produced its own musical version of the story which was copyrighted by founder John Bielenberg. After many years and revisions, the final version of this production was produced in 2015. Beginning in 2016, a new adaptation was produced to address copyright issues that had developed. This version expanded the cast to include a combination of paid professionals and a volunteer community ensemble, which embodies the commitment Cider Mill Playhouse to continue work by professionals while providing opportunities for community theatre involvement.

Peter and the Starcatcher Directed by Norm Johnson March 9 - 26

All content from Kiddle encyclopedia articles (including the article images and facts) can be freely used under Attribution-ShareAlike license, unless stated otherwise. Cite this article:
Cider Mill Playhouse Facts for Kids. Kiddle Encyclopedia.