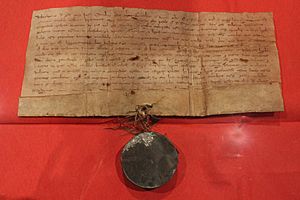 Town charter of Flensburg, of 1284

Town privileges were important things. They were special treaties or royal charters used in the Middle Ages. In such a charter, a sovereign, a monarch granted the town or city special rights. These usually included

Many of those charters were very similar. In the end, only few charters remained in use. Notable ones in the territory of modern-day Germany include the Lübeck law, the Magdeburg rights and the Kulm law.

All content from Kiddle encyclopedia articles (including the article images and facts) can be freely used under Attribution-ShareAlike license, unless stated otherwise. Cite this article:
Town privileges Facts for Kids. Kiddle Encyclopedia.