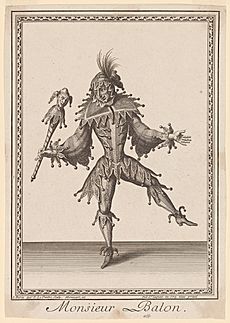 A print of Balon depicted as a harlequin or jester

Claude Balon (also Ballon, often incorrectly named Jean; 1671–1744) was a French dancer and choreographer. The ballet term ballon is sometimes said to be derived from his name, but Robert Greskovic calls this "dubious". Balon danced under the tutelage of the balletmaster Pierre Beauchamp at the Paris Opera. Marie Sallé is identified as a student of Balon's.

All content from Kiddle encyclopedia articles (including the article images and facts) can be freely used under Attribution-ShareAlike license, unless stated otherwise. Cite this article:
Claude Balon Facts for Kids. Kiddle Encyclopedia.