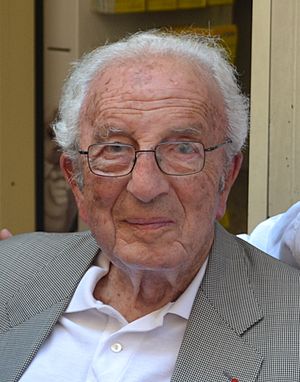 Claude Lebey (born Claude Jolly; 20 November 1923 – 10 January 2017) was a French food critic and writer. He was known for writing the food book Guide Lebey. He also wrote for the news magazines Paris Match and L'Express. He co-presented a show on TF1 between 1974 and 1981.

All content from Kiddle encyclopedia articles (including the article images and facts) can be freely used under Attribution-ShareAlike license, unless stated otherwise. Cite this article:
Claude Lebey Facts for Kids. Kiddle Encyclopedia.