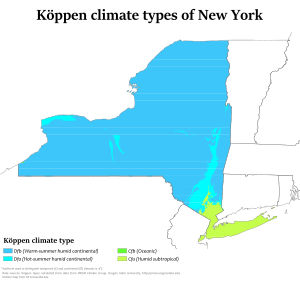 The climate of New York state is generally humid continental, while the extreme southeastern portion of the state (New York City area) lies in the warm temperate climate zone. Winter temperatures average below freezing during January and February in much of New York state, but several degrees above freezing along the Atlantic coastline, including New York City.

Seasonally, summer-like conditions prevail from June to early September statewide, while areas in far southern New York and New York City have summer conditions from late May through late September. Cold air damming east of the Appalachians leads to protracted periods of cloud cover and precipitation east of the range, primarily between the October and April months. Winter-like conditions prevail from November through April in northern New York, and from December through March in southern New York. On average, western New York is much cloudier than points south and east in New York, much of it generated from the Great Lakes. Greenhouse gas emission is low on a per capita basis when compared to most other states due to the extensive use of mass transit, particularly across New York City. The significant urbanization within New York city has led to an urban heat island, which causes temperatures to be warmer overnight in all seasons.

Annual precipitation is fairly even throughout the year across New York state. The Great Lakes region of New York sees the highest annual rain and snow amounts in New York state, and heavy lake effect snow is common in western New York in winter. In the hotter months, large, long-lived complexes of thunderstorms can invade the state from Canada and the Great Lakes, while tropical cyclones can bring rains and winds from the southwest during the summer and fall. Hurricane impacts on the state occur once every 18–19 years, with major hurricane impacts every 70–74 years. An average of ten tornadoes touch down in New York annually. 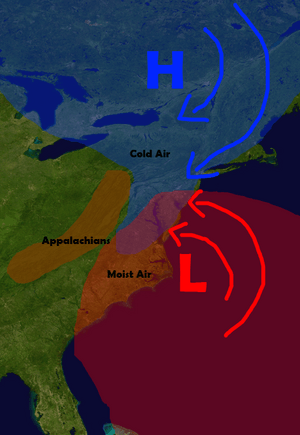 A high pressure system in Canada surges the air southward into the oncoming storm system, creating the potential for heavy wintry precipitation anywhere the cold and moist air masses meet, when it is sufficiently cold.

The annual average temperature across the state ranges from around 39 °F (4 °C) over the Adirondack Mountains to near 53 °F (12 °C) across Long Island. Weather in New York is heavily influenced by two air masses: a warm, humid one from the southwest and a cold, dry one from the northwest. A cool, humid northeast airflow from the North Atlantic is much less common, and results in a persistent cloud deck with associated precipitation which linger across the region for prolonged periods of time. Temperature differences between the warmer coast and far northern inland sections can exceed 36 degrees Fahrenheit (20 degrees Celsius), with rain near the coast and frozen precipitation, such as sleet and freezing rain, falling inland. Two-thirds of such events occur between November and April. which moves from northeast to southwest.

Unlike the vast majority of the state, New York City features a humid subtropical climate (Koppen Cfa). New York City is an urban heat island, with temperatures 5-7 degrees Fahrenheit (3-4 degrees Celsius) warmer overnight than surrounding areas. In an effort to fight this warming, roofs of buildings are being painted white across the city in an effort to increase the reflection of solar energy, or albedo.

In Huntington the average high July temperature is 23 °C, the latter much further north, but in the former on Long Island, summer air is cooled by the surrounding ocean. The summer climate is cooler in the Adirondacks, Catskills and higher elevations of the Southern Plateau due to the elevated terrain. The New York City area and lower portions of the Hudson Valley in contrast have much more sultry and tropical summers with frequent bouts of hot temperatures and high dew points. The remainder of New York State enjoys modestly warm summers. Summer temperatures usually range from the upper 70s to mid 80s °F (25 to 30 °C), over much of the state. The record high for New York state is 108 °F (42 °C), set at Troy on July 22, 1926. 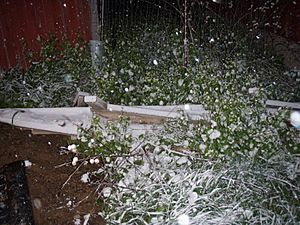 A rare late-season snowfall on May 9, 2010 in Ontario County, Rochester NY MSA.

Winters are often cold and snowy above the New York City and Long Island areas of New York. In the majority of winter seasons, a temperature of −13 °F (−25 °C) or lower can be expected in the northern highlands (Northern Plateau) and 0 °F (−18 °C) or colder in the southwestern and east-central highlands (Southern Plateau). The Adirondack region records from 35 to 45 days with below zero temperatures, in normal to severe winters.; while later that year had a near-record warm November and a record-breaking December. The latter month was about 12 degrees F warmer than average, and several degrees over the previous record.

Southeastern sections of the state near New York City have an average annual cloud cover of 59-62%, while areas of western New York around Buffalo average 71-75% cloud cover annually. 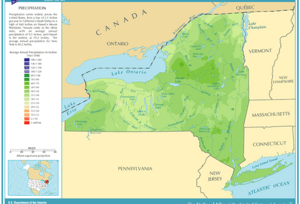 Average precipitation across the region show maxima within the mountains of the Appalachians. Between 28 inches (710 mm) and 62 inches (1,600 mm) of precipitation falls annually across the Northeastern United States, and New York's averages are similar, with maxima of over 60 inches (1,500 mm) falling across southwestern Lewis County, northern Oneida County, central and southern Hamilton County, as well as northwestern Ulster County. The lowest amounts occur near the northern borders with Vermont and Ontario, as well as much of southwestern sections of the state. Temporally, a maximum in precipitation is seen around three peak times: 3 a.m., 10 a.m., and 6 p.m. During the summer, the 6 p.m. peak is most pronounced. 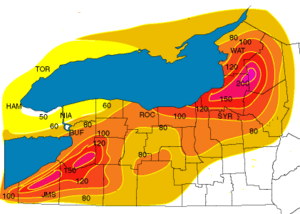 Coastal extratropical cyclones, known as nor'easters, bring a bulk of the wintry precipitation to the region during the cold season as they track parallel to the coastline, forming along the natural temperature gradient of the Gulf stream before moving up the coastline. The Appalachian Mountains largely shield New York City from picking up any lake-effect snow, which develops in the wake of extratropical cyclones downwind of the Great Lakes. The Finger Lakes of New York are long enough for lake-effect precipitation. Lake-effect snow from the Finger Lakes (like elsewhere) occurs in upstate New York until those lakes freeze over. Annual average lake-effect snows exceed 150 inches (380 cm) downwind of Lake Erie and 200 inches (510 cm) downwind of Lake Ontario.

During the summer and early fall, mesoscale convective systems can move into the area from Canada and the Great Lakes. Tropical cyclones and their remains occasionally move into the region from the south and southwest. The region has experienced a couple heavy rainfall events that exceeded the 50-year return period, during October 1996 and October 1998, which suggest an increase in heavy rainfall along the coast.

New York experiences an average of ten tornadoes per year, with one tornado every five years considered strong or violent (EF2-EF5). The return period for hurricane impacts on the state is 18–19 years, with major hurricane return periods between 70–74 years. In 2016, much of New York experienced a severe drought, including the Finger Lakes region, where the drought was preceded by a very mild winter with minimal snow pack.

All content from Kiddle encyclopedia articles (including the article images and facts) can be freely used under Attribution-ShareAlike license, unless stated otherwise. Cite this article:
Climate of New York Facts for Kids. Kiddle Encyclopedia.