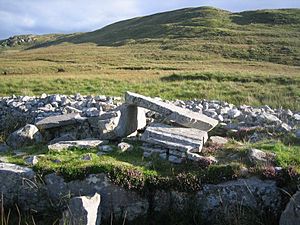 View of western galleries from the north. Note large capstone.

Cloghanmore is a megalithic chamber tomb of the court tomb (or court cairn) type located about 8 km east from Carrick in Malin More, Glencolmcille, in County Donegal, Ireland.

The tomb is oriented east to west, with the main entrance located on the eastern end. It is a large tomb, with parallel twin galleries to either side of the entrance. There are two western galleries each divided into two chambers by jamb stones. One of the two western galleries is topped with a large capstone. The court space measures approximately 45 ft. This configuration, with two galleries located side by side across from the entrance and looking into a central full court, is considered unusual.

A large stone lies in the centre of the court, partially blocking the view of the gallery entrances. The court is marked partly by orthostats and partly by dry-walling, indicating an intermediary state between an open forecourt and a full-court. In front of the left-hand gallery is a gabled lintel-stone. To the left of the entrance, built into the fabric of the (restored) cairn is a subsidiary chamber, with its roofstone propped up against its front. To the right of the entrance is a second chamber with its roofstone almost in place. Next to each of these chambers is a stone with engravings in passage-tomb style – a unique occurrence at a court-tomb. At mid-day in midwinter the sun rides along a ridge of the mountains to the south and shines directly into the second chamber. Looking southeast from the tomb, the tip of Lergadaghtan protrudes just above the slope north of Slieve League, giving a likely sunrise alignment at mid-winter solstice.

All content from Kiddle encyclopedia articles (including the article images and facts) can be freely used under Attribution-ShareAlike license, unless stated otherwise. Cite this article:
Cloghanmore Facts for Kids. Kiddle Encyclopedia.