Coat of Arms of Finland facts for kids 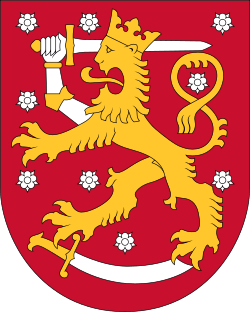 The coat of arms of Finland is a golden lion wearing a crown and holding a sword in the right front paw. The lion is standing up on its back legs on a sabre. There are nine silver roses in a red field around the lion.

All content from Kiddle encyclopedia articles (including the article images and facts) can be freely used under Attribution-ShareAlike license, unless stated otherwise. Cite this article:
Coat of Arms of Finland Facts for Kids. Kiddle Encyclopedia.