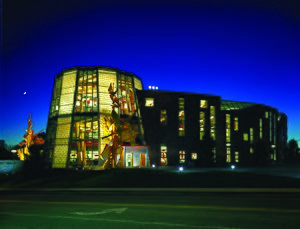 The Columbia Public Library is the public library for the city of Columbia, Missouri. It is the headquarters of the Daniel Boone Regional Library system, which also includes Callaway County Public Library, Southern Boone County Library, Holts Summit Public Library, and two Bookmobiles: The big bookmobile and Bookmobile, Jr. The big bookmobile regularly stops in Auxvasse, Hallsville, Harrisburg, Rocheport, Sturgeon as well as locations within Columbia: Grindstone, North County Shopping Center, and North Rangeline. Bookmobile, Jr. stops regularly in the following locations in Columbia: Bear Creek Neighborhood, Blind Boone Neighborhood, and Columbia Square Apartments. DBRL offers Library-To-Go lockers, a system of lockers that allows patrons to pick up requested library books, CDs, DVDs and audiobooks using their library card, in Holts Summit and Hallsville. Columbia Public Library is the largest library in the system. The library system was established in 1959 as a union of the Boone, Howard, and Callaway county libraries with the Columbia Library. The library was demolished and reconstructed at this same location on Broadway in 2002. In 2001 it had a circulation of 1,171,641 (82% of the DBRL system). In 2009 Columbia Public Library had 734,719 visitors while the DBRL system had a circulation of 2,110,378. In 2018, the DBRL system had 715,204 visits and the Columbia Public Library had a circulation of 1,400,568. 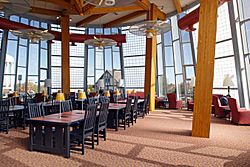 All content from Kiddle encyclopedia articles (including the article images and facts) can be freely used under Attribution-ShareAlike license, unless stated otherwise. Cite this article:
Columbia Public Library Facts for Kids. Kiddle Encyclopedia.