Kids Encyclopedia Facts
For the song by Björk, see The Comet Song. 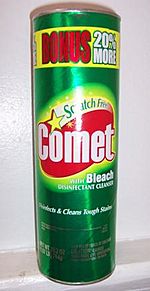 A can of Comet

"Comet" is a well-known humorous children's song in North America. It describes the deleterious effects of consuming Comet cleanser—a powdered cleansing product. The most prominent and often-occurring effect in the song is that it turns one's teeth green. Among other effects alleged by this song are an unappealing taste and, unsurprisingly, a tendency to vomit.

Although this song, like many in its genre, has widely variable lyrics, a common version contains the following words:

The melody of the song is the "Colonel Bogey March".

All content from Kiddle encyclopedia articles (including the article images and facts) can be freely used under Attribution-ShareAlike license, unless stated otherwise. Cite this article:
Comet (song) Facts for Kids. Kiddle Encyclopedia.