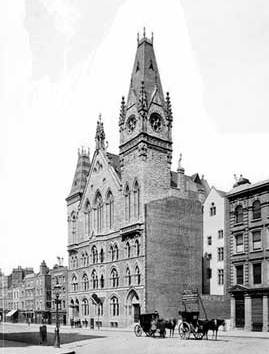 The Congregational Memorial Hall in Farringdon Street, London was built to commemorate the 200th anniversary of Great Ejection of Black Bartholomew's Day, resulting from the 1662 Act of Uniformity which restored the Anglican church. The two thousand puritan ministers who refused to take the oath of conformity thereby established non-conformism.

The architect of the hall was John Tarring. 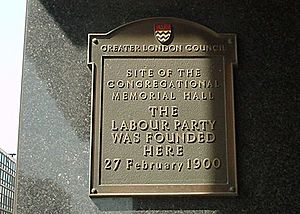 The plaque at Caroone House, recording the foundation of the Labour Party

The hall was built upon the site of the Fleet Prison in Farringdon Street. It opened in 1875 and served as a meeting place and home for the Congregational Library. Other progressive organisations met there and the Labour Party was founded at a meeting there on 27 February 1900.

The hall was demolished in 1968 and Caroone House was built on the site — an office which was used by British Telecom for its international business and telephone tapping.

All content from Kiddle encyclopedia articles (including the article images and facts) can be freely used under Attribution-ShareAlike license, unless stated otherwise. Cite this article:
Congregational Memorial Hall Facts for Kids. Kiddle Encyclopedia.