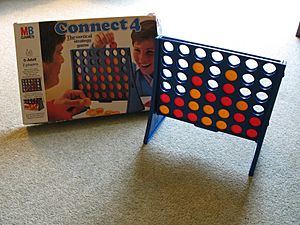 Connect Four (also known as Captain's Mistress, Four Up, Plot Four, Find Four, Fourplay, Four in a Row, Four in a Line and Gravitrips (in Soviet Union)) is a two-player connection game in which the players first choose a color and then take turns dropping colored discs from the top into a seven-column, six-row vertically suspended grid. The pieces fall straight down, occupying the next available space within the column. The objective of the game is to be the first to form a horizontal, vertical, or diagonal line of four of one's own discs. Connect Four is a solved game. The first player can always win by playing the right moves. It is not A "board game"

The game was first sold under the Connect Four trademark by Milton Bradley in February 1974.

Object: Connect four of your checkers in a row while preventing your opponent from doing the same.

The animation demonstrates Connect Four gameplay where the first player begins by dropping his/her yellow disc into the center column of the game board. The two players then alternate turns dropping one of their discs at a time into an unfilled column, until the second player, with red discs, achieves four discs in a row, diagonally, and wins. If the game board fills before either player achieves four in a row, then the game is a draw.

Connect Four is a two-player game with "perfect information". This term describes games where one player at a time plays, players have all the information about moves that have taken place, and all moves that can take place, for a given game state. Connect Four also belongs to the classification of an adversarial, zero-sum game, since a player's advantage is an opponent's disadvantage.

One measure of complexity of the Connect Four game is the number of possible games board positions. For classic Connect Four played on 6 high, 7 wide grid, there are 4,531,985,219,092 positions for all game boards populated with 0 to 42 pieces.

The game was first solved by James Dow Allen (October 1, 1988), and independently by Victor Allis (October 16, 1988). Allis describes a knowledge based approach, with nine strategies, as a solution for Connect Four. Allen also describes winning strategies in his analysis of the game. At the time of the initial solutions for Connect Four, brute force analysis was not deemed feasible given the game's complexity and the computer technology available at the time.

Connect Four has since been solved with brute force methods beginning with John Tromp's work in compiling an 8-ply database (Feb 4, 1995). The artificial intelligence algorithms able to strongly solve Connect Four are minimax or negamax, with optimizations that include alpha-beta pruning, move ordering, and transposition tables. The code for solving Connect Four with these methods is also the basis for the Fhourstones integer performance benchmark.

There are many variations of Connect Four with differing game board sizes, board arrangements, game pieces, and/or gameplay rules. Many variations are popular with game theory and artificial intelligence research, rather than with physical game boards and gameplay by persons. 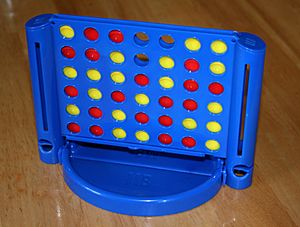 A travel version of the Milton Bradley game

Several versions of Hasbro's Connect Four physical gameboard make it easy to remove game pieces from the bottom one at a time. Along with traditional gameplay, this feature allows for variations of the game.

Pop Out starts the same as traditional gameplay, with an empty board and players alternating turns placing their own colored discs into the board. During each turn, a player can either add another disc from the top or, if one has any discs of his or her own color on the bottom row, remove (or "pop out") a disc of one's own color from the bottom. Popping a disc out from the bottom drops every disc above it down one space, changing their relationship with the rest of the board and changing the possibilities for a connection. The first player to connect four of their discs horizontally, vertically, or diagonally wins the game.

Before play begins, Pop 10 is set up differently from the traditional game. Taking turns, each player places their opponent's color discs into the slots filling up only the bottom row, then moving on to the next row until it is filled and so forth until all rows have been filled.

Gameplay works by players taking turns removing a disc of one's own color through the bottom of the board. If the disc that was removed was part of a four-disc connection at the time of its removal, the player sets it aside out of play and immediately takes another turn. If it was not part of a "connect four", then it must be placed back on the board through a slot at the top into any open space and the turn ends, switching to the other player. The first player to set aside ten discs of his or her color wins the game.

The 5-in-a-Row variation for Connect Four is a game played on a 6 high, 9 wide, grid. Hasbro adds two additional board columns, already filled with player pieces in an alternating pattern, to the left and right sides of their standard 6 by 7 game board. The game plays similarly to the original Connect Four, except players must now get five pieces in a row to win. Notice this is still a 42-ply game, since the two new columns added to the game represent twelve game pieces already played, before the start of a game.

In this variation of Connect Four, players begin a game with one or more specially marked, "Power Checkers" game pieces, which each player may choose to play once per game. When playing a piece marked with an anvil icon, for example, the player may immediately pop out all pieces below it, leaving the anvil piece at the bottom row of the game board. Other marked game pieces include one with a wall icon, allowing a player to play a second consecutive non winning turn with an unmarked piece, a "×2" icon, allowing for an unrestricted second turn with an unmarked piece, and a bomb icon, allowing a player to immediately pop out an opponent's piece.

Hasbro also produce various sizes of Giant Connect Four, suitable for outdoor use. The largest is built from weather-resistant wood, and measures 120 cm in both width and height. Connect Four was released for the Microvision video game console in 1979, developed by Robert Hoffberg. It was also released for the Texas Instruments 99/4 computer the same year.

With the proliferation of mobile devices, Connect Four has regained popularity as a game that can be played quickly and against another person over an Internet connection.

In 2007, Milton Bradley published Connect 4 Stackers. Instead of the usual grid, the game features a board to place colored discs on. Just like standard Connect 4, the object of the game is try to get 4 in a row of a specific color of discs.

In 2015 Winning Moves published Connect 4 Twist & Turn. This game variant features a game tower instead of the flat game grid. The tower has 5 rings that twist independently. Game play is similar to standard Connect 4 where players try to get 4 in a row of their own colored discs. However, with Twist & Turn, players have the choice to twist a ring after they have played a piece. It adds a subtle layer of strategy to game play.

All content from Kiddle encyclopedia articles (including the article images and facts) can be freely used under Attribution-ShareAlike license, unless stated otherwise. Cite this article:
Connect Four Facts for Kids. Kiddle Encyclopedia.