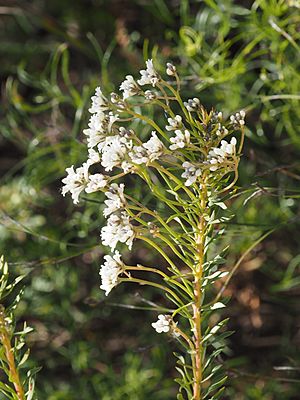 Conospermum taxifolium, commonly known as variable smoke-bush, yew-leaf smoke bush or paint brush, is a plant in the family Proteaceae and is endemic to eastern Australia. It is an erect shrub with narrow elliptic to narrow egg-shaped leaves with the narrower end towards the base and panicles of cream-coloured to white, tube-shaped flowers.

Variable smoke-bush grows in heath and woodland on the coast and nearby ranges, sometimes further inland, and is widespread from southern Queensland through eastern New South Wales to the far eastern corner of Victoria.

All content from Kiddle encyclopedia articles (including the article images and facts) can be freely used under Attribution-ShareAlike license, unless stated otherwise. Cite this article:
Conospermum taxifolium Facts for Kids. Kiddle Encyclopedia.