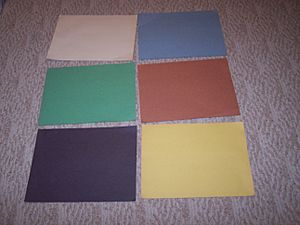 Construction paper (sugar paper) is a tough, coarse, colored paper. The texture is slightly rough, and the surface is unfinished. Due to the source material, mainly wood pulp, small particles are visible on the paper’s surface. It is used for projects or crafts.

The origin of the term "sugar paper" lies in its use for making bags to contain sugar. It is related to the "blue paper" used by confectionery bakers from the 17th century England onwards; for example, in the baking of Regency ratafia cakes (or macaroons).

The term "construction paper" was associated with the material in the early 20th century, although the general process for creating the paper began in the late 19th century when industrialized paper production and synthetic dye technology were combined. Around that time, construction paper was primarily advertised for classroom settings as an effective canvas for supporting multiple drawing mediums. The process for creating the paper involved a machine oriented process that exposed the paper to dyes while it was still pulp, resulting in a thorough distribution and brilliance of colour. The primary dyes involved in producing construction paper were abundant until Germany, the main producer of aniline for dyes at the time, became involved in World War I and ceased its exports. The shortage marked a period in which construction paper was created using substitute colouring methods.

One of the defining features of construction paper is the radiance of its colours. Before the methodology behind construction paper's colouring was introduced, most paper was coloured by pigments and vegetable oil, which had weaker staining capabilities. Synthetic dyes were later developed, which provided a wider range of colours, stronger dyeing strength, and had lower costs. However, the colours given by synthetic dyes tend to fade over short periods of time, an effect often seen in construction paper, noted by greying colours and brittleness.

All content from Kiddle encyclopedia articles (including the article images and facts) can be freely used under Attribution-ShareAlike license, unless stated otherwise. Cite this article:
Construction paper Facts for Kids. Kiddle Encyclopedia.