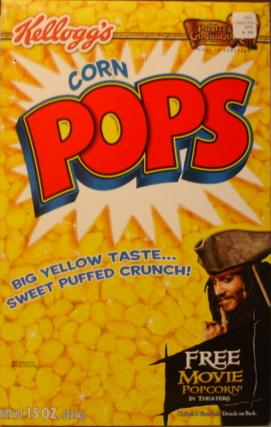 A box of Corn Pops

Corn Pops is a breakfast cereal made by Kellogg's, described by the company as "crunchy sweetened popped-up corn cereal." The cereal is also known for going stale much faster than other cereals. To prevent this, it is packaged in a different type of bag than most cereals.

Originally called Sugar Pops in 1951, and later Sugar Corn Pops, the name was changed to "Corn Pops" and then, in January of 2006, the name of the cereal was changed to Pops only to be changed back to Corn Pops after a few months of poor reception. In mid 2007, Corn Pops launched its first line extension in many years called "Peanut Butter Pops". 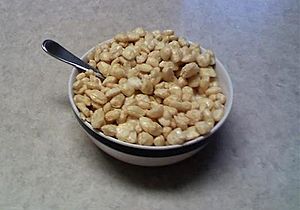 All content from Kiddle encyclopedia articles (including the article images and facts) can be freely used under Attribution-ShareAlike license, unless stated otherwise. Cite this article:
Corn Pops Facts for Kids. Kiddle Encyclopedia.