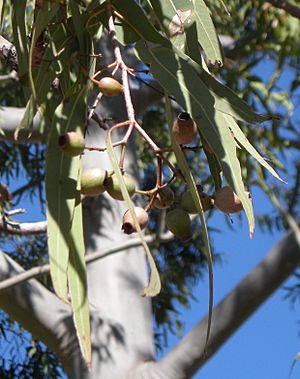 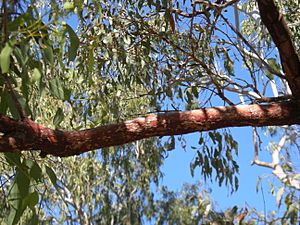 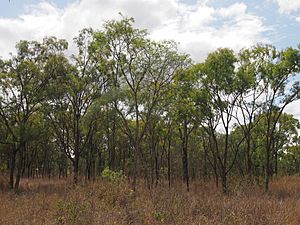 Corymbia erythrophloia, commonly known as the red bloodwood, variable-barked bloodwood, red-barked bloodwood or gum-topped bloodwood, is a species of tree that is endemic to Queensland. It has rough bark on the trunk and branches, egg-shaped or lance-shaped adult leaves, flower buds in groups of seven, creamy white flowers and urn-shaped to spherical fruit.

The first formal description of this species was by William Blakely in 1934 who published the description in his book A Key to the Eucalypts and gave it the name Eucalyptus erythrophloia. The type specimens were collected by Thomas Lane Bancroft (1860–1933) near Eidsvold in 1919. In 1995, botanists Ken Hill and Lawrie Johnson defined the genus Corymbia, identifying the bloodwoods, ghost gums and spotted gums as a group distinct from Eucalyptus and they changed the name Eucalyptus erythrophloia to Corymbia erythrophloia.

Corymbia erythrophloia is found down the east coast of Queensland as far north as Queenstown on the Cape York Peninsula where it is found as far west as the Gulf of Carpentaria. The range then extends as far south as the Hervey Bay with an isolated population found further south to the west of Brisbane. It is found on grassy woodlands or low rolling hills containing clayey or stony soils mostly of volcanic origin. It is often found in association with mountain coolibah or the silver-leaved ironbark.

This eucalypt is classified as of "least concern" under the Queensland Government Nature Conservation Act 1992.

The tree can be grown as a shade tree that is a bird attractor in gardens where it can tolerate a hot overhead sun and dry soils. Soils can be ordinary or enriched, containing clay and mildly acidic to mildly alkaline. Trees are pruned to retain one main trunk sometimes are allowed multiple trunks which are well-spaced to develop.

All content from Kiddle encyclopedia articles (including the article images and facts) can be freely used under Attribution-ShareAlike license, unless stated otherwise. Cite this article:
Corymbia erythrophloia Facts for Kids. Kiddle Encyclopedia.