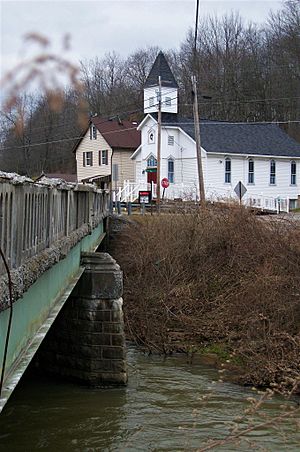 In 1793, William Stephenson and Aaron Wor (from whose name nearby Worthington may have been derived) settled a tract of land just north of the forks of Big and Little Buffalo Creeks. John Craig was the holder of the tract, and in 1805 his son Samuel established a fulling mill on the banks of Buffalo creek. In 1814 he erected a carding roll. In 1835, partnering with his brother John and a man named Robert Cooper, he began to manufacture flannels, blankets and woolen goods. In 1843, the building was burned but was rebuilt soon after. In 1856, the firm consisted of the Craigs and William F. Rumberger, under the firm name of Craig and Rumberger.

Until 1843 the town was known as Craigtown, and it became known afterwards as Craigsville. The first child born within its limits was born March 30, 1809. The flouring mill, which was later a part of the woolen mill plant, about thirteen rods below the woolen factory, on the right bank of the creek, was erected by John Craig, Jr., Joseph T. McCurdy and Samuel S. Wallace, early in 1849, and was a three-story frame structure. In 1871, John Craig died suddenly soon after breakfast one morning from neuralgia of the heart. His heirs conveyed the undivided two-thirds of the mill property to McCurdy and Joseph Minteer, May 14, 1872, for $2,000. The flouring mill was closed in 1905 and the building was taken over by the woolen mill to allow for necessary expansion.

The Craigsville post office was established here on November 23, 1869, with William F. Rumberger, post master. The new schoolhouse, in lieu of No. 14 before the division of Franklin township, is situated on the public road on the lower or right-hand side of the creek about 100 rods below the grist mill.

The first separate assessment of Craigsville was made in 1876 and gave 25 taxables: one physician, three clerks, one boss carder, two boss weavers, one laborer, one helper, one dyer, one wool sorter, one picker, two teamsters, one spinner, one blacksmith, one wagonmaker, one miller, and one weaver.

A store was opened near the mills in 1860 by Samuel S. Wallace, John C. Wallace, and John Craig, afterward being sold in 1872 to Christopher Leard & Sons. Later it was owned by J. W. Minteer, who also was postmaster. The post office was established there in 1869 with W. F. Rumberger as the first official in charge.

In 1884 the Craigsville United Methodist Church was constructed on the present site. Rev. Donovan Daniels is the present minister, and the church has approximately 30 members. The Craigsville Elementary School was also erected around this time.

The village in 1913 had a population of two hundred eighty, most of whom were dependent on the woolen mills for employment, and consisted of thirty-five houses, a school, a church, and two stores.

In 1913 the Buffalo, Rochester and Pittsburgh Railroad (later the Baltimore and Ohio) extended their tracks two miles, almost parallel with Big Buffalo Creek, where the Pittsburgh Limestone Corporation, a subsidiary of the U. S. Steel Corporation, opened a large limestone mine. The capacity of this mine was approximately fifteen hundred tons, later increased to approximately thirty-five hundred tons daily. The major portion of their product went to the blast furnaces in the Pittsburgh district and the remainder generally was used for the manufacture of cement and stone for highway construction.

On April 23, 1990, a train carrying a caustic chemical and crude oil derailed and exploded, spewing about 100,000 gallons of oil and releasing a chemical cloud that forced 200 people to evacuate. 29 cars in a 97-car Buffalo & Pittsburgh Railroad freight train jumped the tracks in a steep ravine along Buffalo Creek. At the fire's peak, flames shooting several hundred feet high could be seen 30 miles away. In addition to the oil, one tanker leaked sodium hydroxide that sent a chemical cloud drifting toward Worthington, causing 200 people to be moved from their homes overnight. Ironically, the event occurred on Earth Day.

Today, Craigsville is part of Worthington-West Franklin Township. Nearly everything has shut down, but the United Methodist Church is still active, and Allegheny Mineral Corporation operates a limestone mine at the site of the old Graff-Kittanning Clay Products Company.

All content from Kiddle encyclopedia articles (including the article images and facts) can be freely used under Attribution-ShareAlike license, unless stated otherwise. Cite this article:
Craigsville, Pennsylvania Facts for Kids. Kiddle Encyclopedia.