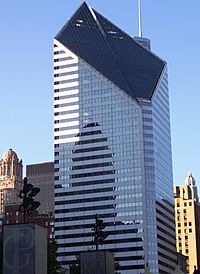 Crain Communications Building, formerly known as Smurfit-Stone Building and Stone Container Building, is a small skyscraper in Chicago, Illinois constructed in 1983 and finished in 1984. The building is 582 feet (177 meters) and 41 stories tall. It is well known for the diamond shape upon the top of the building. The diamond shaped facade is also known to occasionally sport worded slogans at night, such as "GO BEARS" or "GO CUBS."

The design of the south east corner of the building features a prominent vertical slit from the ground, through the diamond shaped facade, and to the top of the building.

The building has appeared in Transformers: Dark of the Moon (2011).

All content from Kiddle encyclopedia articles (including the article images and facts) can be freely used under Attribution-ShareAlike license, unless stated otherwise. Cite this article:
Crain Communications Building Facts for Kids. Kiddle Encyclopedia.